What's in a Diagnosis?

What’s in a Diagnosis…..

Like many a story, it all started with a sick horse. I’d bought a horse in Germany when I was living there that was in a bad state (looked terrible, went terrible), did a lot of rehab work and got her back to competition and we were doing great. Everything was fine….. but it wasn’t. There was something that wasn’t quite right with her – little things – she reacted very badly to mozzie bites, it took a long time to get fitness on her – she felt like she was running out of breath and I had to do training in short, sweet sessions and it took 16 weeks to be able to get to ride for 6-7 minutes without a break. It took 9 months to be able to get her fit enough to do a S-Klasse test. The work was easy but her breathing was just never great.

But she was competitive (1st & 2nd at her PSG starts with 78% and 74%) – so could there really be something wrong? She looked great, apart from the breathing and the immune system stuff, I just kept managing it as best as possible and it seemed to be working – so was it in my mind?

I didn't need another rehab case but I just
couldn't let this go..... 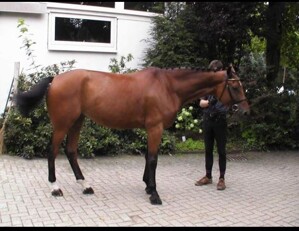 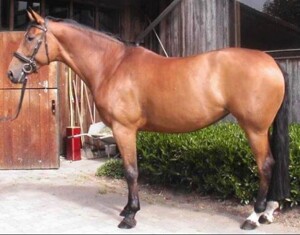 But things changed and I had to come back to Australia. I brought her with me and her health really declined through quarantine and in Australia. She was one of the last horses to come through with the old EI vaccination policy which saw her double vaccinated within a short period. She got bitten by a wasp in quarantine 2 days after the second vaccination and I nearly lost her. Her immune system was so compromised and the bite nearly did her in and she became a pin cushion for the next 8 hours to keep her with us. She recovered (so many weeks sitting around to recover) and she did ok on the trip to Australia but quarantine was not a happy place for her – I was there with her but she took it hard with 40 other horses screaming and carrying on all day - and the veterinarians are only there to check for EI – no other health problems and aren’t interested in discussing anything else.

Out to freedom and thus started years of deterioration and trying to get to the bottom of what was going on. She came back into work but the breathing problems were bad and all her muscles were wasting all the time – particularly in summer and change of seasons – she’s come good, deteriorate, come good and it was a continuous cycle. Tried putting her in foal to give her a year off, foal was born over a month early and died. She was not well after that – not emotionally or physically.

So many blood tests, skin tests, hair tests….. all came back great, like a healthy horse – but she was not great. Muscle wastage in areas she’d previously had volume, still the breathing and a compromised immune system (feet falling apart, abscesses (at one time, 13 abscess in 8 weeks), rain scald (without any rain), lumps and bumps) that meant she had to be covered 24/7 (even in the stables), couldn’t cope with any weather changes, she had a long and double downed coat that wouldn’t come out… she was tested for everything from cushings to mineral deficiency. Nothing.

Somehow through intense care and pure will, she’d always done ok – I’d long given up ever being able to compete her again, but just to have her happy, healthy and maybe even well enough to do an embryo transfer from would be good. By September 2017, she was not great. I couldn’t ride her at all anymore - she should have been in her peak years at GP by now but instead, she couldn’t trot a short side in hand. By the January 2018, I felt I was watching my horse die in front of me. The muscle wastage was heart breaking as I saw her once bulbous neck turn to a skeletal line and her boofy strong back melt into a spine with ribs and a grass belly. Her coat was rough and coarse and my big fat boombi horse had become all angles and unhappiness. Blood tests still came back fine.

Pic: her coat and overall health was just terrible 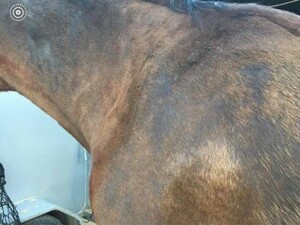 I’d been hearing for a few months about a vet that was coming back from the States to set up practice back in WA. She was diagnosing all kinds of things and working magic. I was sceptical – my horse had had so many tests both in Germany and Australia and no one could find anything. But still, over weeks, more stories of major changes in horses. Mares that had become unrideable were back at competition. Horses that had had to be retired due to illness, were back under saddle. What the hell? I was desperate. I got a number and started weeks and weeks of begging and organising.

Dr Kylie Brkusich arrived and as I walked my horse from the paddock to the stables, she observed how the horse was moving and asked me to describe my mare’s symptoms. I took her rug off and she said “oh, I know what this is”. She did some tests. Moved the horse in different ways, examined the horse with her tools and within 6 minutes of her first laying eyes on the horse – I had a DIAGNOSIS. My horse had Lung Qi deficiency affecting  the immune system - skin coat and breathing. Her wasting and pain was caused by a myofascial disease similar to what is diagnosed as EPM in the United States.  She had probably had this for some time .

Australia doesn’t officially have EPM but it seems Dr Kylie said she has found some horses with similar symptoms to those diagnosed in the US.  EPM (Equine Protozoal Myeloencephalitis) is caused by protozoal parasites that infect and invade the central nervous system – there’s all kinds of research to google but it’s generally got from grazing on grass or hay where the parasites exist.

The trouble with a Diagnosis….

I have to tell you, it’s confronting to get a diagnosis on a horse. Dr Kylie is very matter of fact – she sees thousands of horses a year that have not had a diagnosis – like my horse, they might have had lots of treatments (everything from massages to antibiotics and everything in between) but not an actual diagnosis. We’ve all had that where a vet or practitioner will say ‘let’s start with this and see how they respond’ – but that’s not a diagnosis – that’s a treatment. Getting the actual hard core, full answer, is confronting.

First there is disbelief – is that it? She found it so quick! Can it be real? (then you have to remember, this is her specialist area like taking a horse to an eye vet – they only do that and they know their business – she only sees horses that people can’t put their finger on the problem and in her career, she’s seen thousands and thousands of these horses – she knows it).

Second, there’s relief. But unfortunately, that’s followed by a thumping great whack of GUILT. OMG, I kept riding this horse and they’ve been in so much pain. I’ve lunged her when she was struggling, I pushed her to check if it wasn’t just behavioural…. OMG – so much guilt!

OK, so somewhere in there comes some tears. Tears of relief, tears of guilt, tears…. Pretty much everyone gets them and now I can see the funny side. But it really is overwhelming when you’ve been going through the mystery illness for a while (years) and you’ve invested heavily (emotionally, financially).

Then, it’s down to business of treatment.

Right – what do we have to do now?

I had the option with this one to send off for more tests to confirm the diagnosis but some of them would have to go the US and they took weeks. I can’t wait – let’s start treatment – she’d be dead in that time at the rate she was declining and I’d already spent over $12,000 on tests etc. I need to get it fixed.

Dr Kylie explained the kind of treatment she had had success with for treating these symptoms.

First, the horse has to be pain free. The muscle wastage (a common symptom she'd had experience with) was myofascitis and she was in acute pain in the fascia (the largest organ in the horse’s body). (There’s some great research here : http://www.equus-soma.com/fascia/horse-fascia-main/)

Dr Kylie did acupuncture for a few things including pain relief and immune system repair on the day.

She also prescribed some Chinese herbs (these are blend of ground roots that have had many years of testing that she is the sole distributor for in Australia) and I now know that they are magic herbs! 2 teaspoons twice a day for 3 days, then 1 teaspoon twice a day until the jar ran out. That’s it. A treatment, not a supplement. Non swabable and the horses love them.

It seemed like so little after so long…. But again, I was willing to try anything.

Cut to 3 weeks later – my horse is eating normally, muscles are beginning to bulge, she’s bright and her coat is getting a shine back. Most of all, her personality had come back!

She had the next 8 weeks in repair until Dr Kylie came back to Victoria. Pretty much all of the symptoms were gone and she’s looking like a ‘normal’ horse again. Now we start to rebuilding the lung capacity (from the wastage) and the next round of immune system repair. This mare had been sick for many years and unlike most horses who Dr Kylie sees, it was a bit of unpeeling the onion to treat the residual symptoms. Different herb treatment for a few weeks for the lungs and we can start walking under saddle! WOOHOO!!!

And so starts the rehab…..

(stay tuned for our next article on the process of rehab - it's not bringing a horse back into work!)